Belarusian State Philharmonic Society
Home / Artists / The ensemble of soloists under the control of I. Ivanov

The ensemble of soloists under the control of I. Ivanov 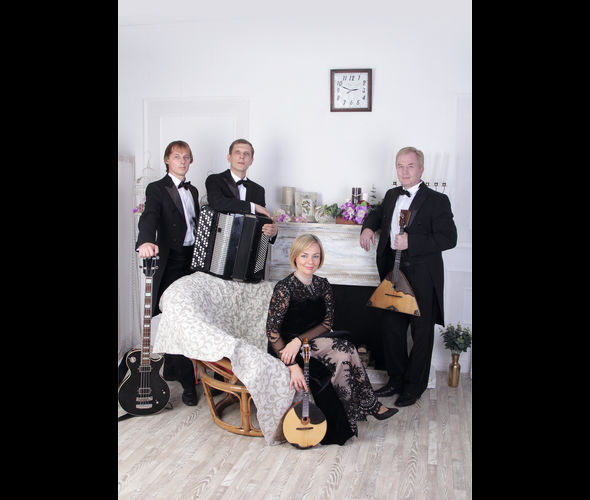 In 1994 the 3rd year students Igor Ivanov (balalaika) and Andrew Sivakov (button accordion) organized a duet at Belarusian State Academy of Music on the Department of Folk Instruments where they studied. The first success of the ensemble is related to various performances in Belarus. In 1996 the listeners in Western Europe got the opportunity to get acquainted with the work of the ensemble, when they went on a successful tour to Germany and France.

In 1997 there came an idea to make an instrumental quartet out of the ensemble: domra and bass-guitar replenished the diet of balalaika and button accordion (I. Ivanov – A. Sivakov). The same year the ensemble made up of four people organized the first tour abroad, to France and Germany.

Creative activity of the duet continued together with its development. I. Ivanov and A. Sivakov were doing an assistantship course, mastering in such fields of study as "solo performance" and "chamber orchestra" (artistic director and research manager – professor V.A. Chaban). As a matter of fact, in 1998 the ensemble stopped its activity a bit.

In 1999 the duet was invited to the Belarusian State Philharmonic Society and the following two years the musicians worked there. Each musician (both of the quartet and the duet) took part in competitions as a soloist, became and laureate and a diploma holder of various international competitions.

On the 3rd of October quartet "The Slavs" got another name – The Ensemble of Soloists under the direction of I. Ivanov.
Since January 2013 a laureate of international competition, student of Belarusian State Academy of Music Gleb Grechenkov (bass-guitar) became the member of the ensemble.
In its activity the ensemble adheres to academic style. This can be judged by the repertoire and the way of performance. Concert programmes of the ensemble contain both arranged works of world classics and bright arrangements of Slavic folk music. A special place in these programmes belongs to the works by the Belarusian composers.

The special attention is paid to the stylistics of music of different epochs. Original classical works in the transcriptions by I. Ivanov and A. Sivakov don't loose their artistic criteria, but even more, they are enriched with new tone colouring, sound up-to-date, preserving their style qualities.

The Ensemble of Soloists under the direction of I. Ivanov successfully performs in Minsk and goes on tours in Belarus and abroad, including such countries as Germany, Italy (Bologna), China (Beijing, 2008), France, Andorra, Poland, Belgium (Brussels), India (2009), Turkmenistan (Ashgabat, 2007), Transnistria, Syria (2010), the Lebanon (2010), the Russian Federation and other. Since 2003 the ensemble has recorded 3 CDs. Besides, they have worked out more than 30 concert programmes, including such ones as "Creative evening of the composers I. Luchenok and E. Andreenko"; concert programmes with People's Artist of Russia Alexander Tsigankov and a laureate of international competitions Andrew Gorbachev; "Creative evening of the composer V. Sheviakov" (Vitebsk); "Evening of ancient Russian romance" with N. Tishko (vocal); project "I remember that miraculous moment" with Igor Zadorozhny and "The night is bright" with Alexander Avramenko (vocal), "Country and bluegrass stars of the USA" with Tony Ellis Quartet (the USA); joint project with the Ensemble of Cossack's Song "Batska Ataman; concert programmes with a laureate of international competitions E. Gridiushko (guitar); and a laureate of international competitions Natalia Korsak (domra); "New Year Surprises" with T. Starchenko and the State Chamber Orchestra of the Republic of Belarus; thematic evenings with I. Zubrich, N. Kozinin, A. Ogarkova; various solo programmes.

The concerts of the collective are always a success. Rich repertoire and skills of the musicians let them present chamber music to the audience and expand the number of fans. 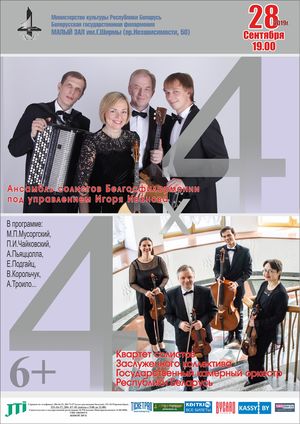 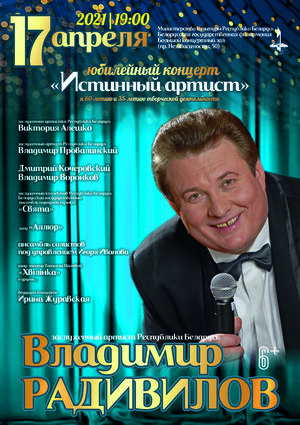 “True artist”: Creative evening dedicated to the 60th anniversary of the Honored Artist of the Republic of Belarus Vladimir Radivilov
17.04.2021 19:00
Весь архив