The piano duet of the Belarusian State Philharmonic Society was created in 1980. It is still the only belarusian piano duet that takes part in numerous concerts. During all the time of the duet's existence its cast have been changed several times, but Valery Borovikov remains as the permanent member of the duet beginning from its creation. For the transcriptions made for the pianos he became a laureate of the first prize of the Second Intermational Contest Duo Kodama. His arrangements are various by the genres and forms: symphonic music, ballet, opera, music for the theatre performances and cinema. Some of them were edited by "The Soviet Composer" publishing house. The creations arranged by Borovikov are a business card of the belarusian duet. At the same time they are known all over the world by the composers and performers. They were represented in France, the USA, Canada, China, the countries of CIS and also were included in the programs of numerous international piano contests. This transcriptions have received an appreciation from such honoured leaders of the russian musical art as А.Shnitke, B.Chaikovsky, А.Eshpay.

The duet is an initiator and organizer of the INTERNATIONAL PIANO DUET FESTIVAL «DUETTISSIMO» in Minsk.

The duet has records on the Belarusian radio and television. 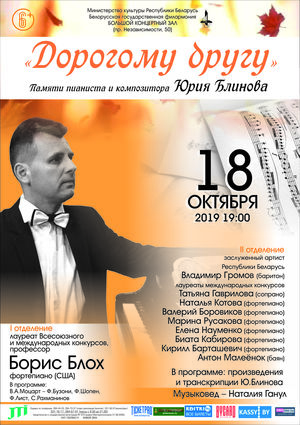