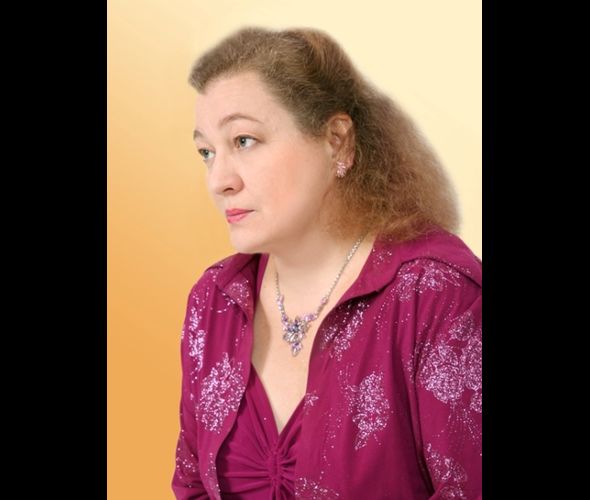 The honored artist of the Republic of Belarus

Irina Shumilina was born in Minsk (Belarus) in the family of musicians. She finished specialized music school and Belarusian State Conservatory (the class of Professor G.Shershevsky – a student of famous musicians of St. Petersburg school V. Sofronitsky and S. Savshinsky). Then she continued studying as a post-graduate at P. Tchaikovsky State Conservatory in Moscow ( the class of Professor L.Vlasenko). Being a student Irina Shumilina gave a great number of solo concerts. She took part in many festivals and won the National and International Music Competitions. She has been working as a soloist in the Belarusian State Philharmonic Society and has been engaged in an intensive concert activity since graduation time. The right understanding of music styles, high responsibility to her art and the free competence in all piano art resources are the peculiar features of the pianist. Her repertoire is amazingly wide and many-sided. But she is attracted mostly by monumental forms: sonatas, suites, fantasias, piano cycles, concerts by Russian and foreign authors. Her favorite composers are S. Rachmaninov, M. Mussorgsky, P. Tchaikovsky, S. Prokofiev, L. Beethoven I. Brahms, R. Schumann, F. Schubert, F. Chopin, F. Liszt.

I.Shumilina has a large fund of records of Russian, Belarusian and foreign music on National radio and television, and she regularly fills it up.

Last years I. Shumilina took part in the International festivals as "German – Belarusian Musical Autumn" (2000, Germany), "International Musical Festival n.a. Schumann" (2002, Germany), the Festival n.a. P. Tchaikovsky and N.F. von-Mekk (2005, Ukraine). From 2003 till 2005 she performed in different cities of Russia and Belarus with the solo concerts devoted to the 200th anniversary of M. Glinka. In 2006 she gave a series of commemorative concerts for the 250th anniversary of Mozart.

I.Shumilina's remarkable achievements in art have always evoked a warm response and have been enthusiastically recognized by audience. 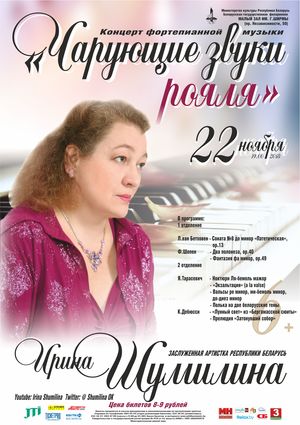 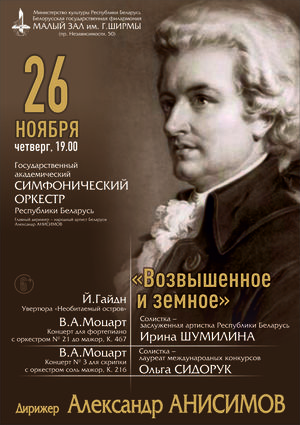 “Sublime and earthly”: The State Academic Symphony Orchestra of the Republic of Belarus, conductor – Alexander Anisimov
26.11.2020 19:00 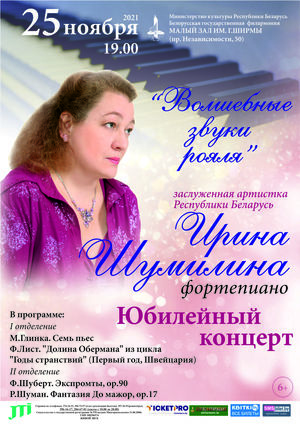