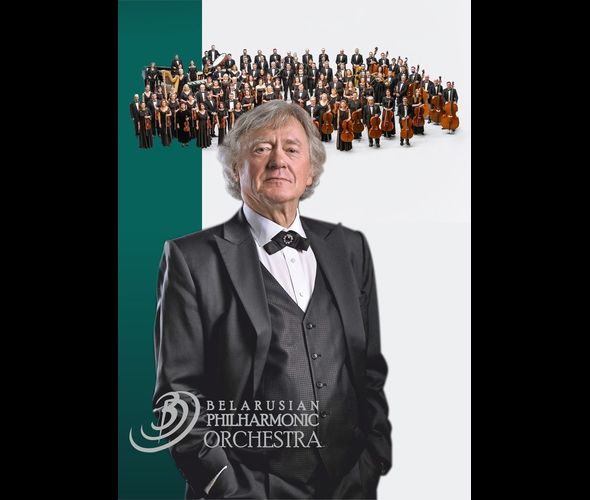 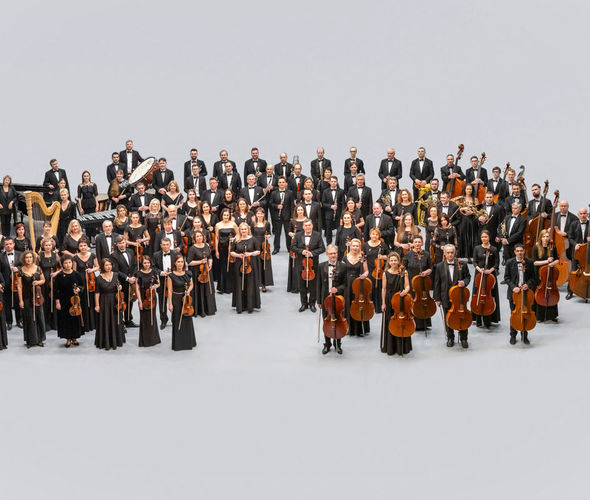 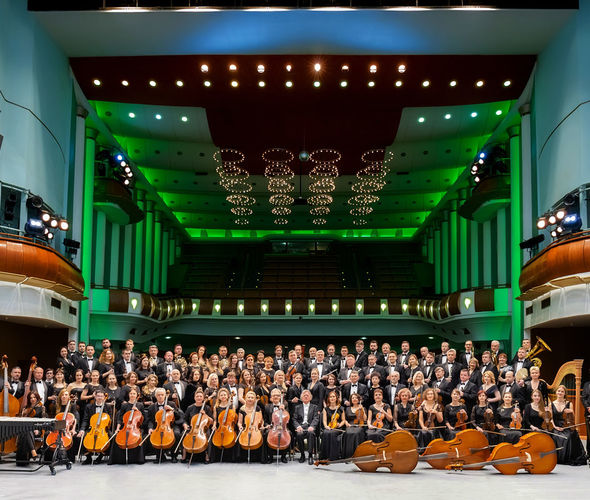 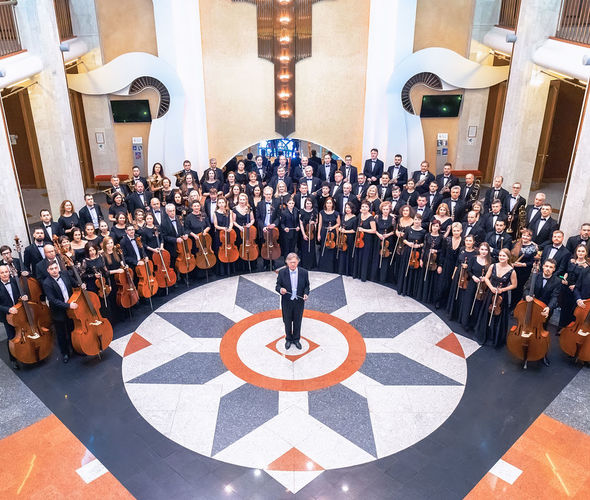 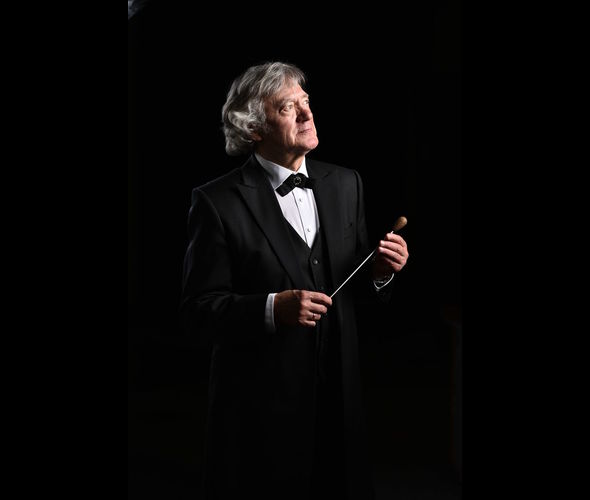 The State Academic Symphony Orchestra of the Republic of Belarus

One of the oldest collectives of former Soviet Union was established in April of 1927.

Since 1937 the Symphony Orchestra serves on the Belarusian state Philharmonic society.

In 1961 the collective was named as  the State Symphony Orchestra of the Belarusian SSR.

In September of 1980 the Orchestra was awarded the Academic title.

The orchestra’s repertoire is wide and diverse – from classical symphonic music of the XVIII–XX centuries to compositions by modern Belarusian, Russian and western European authors. The orchestra gives up to 50 concert programs per season in Minsk and other cities of Belarus.

The public of Belarus highly appreciated the work of the orchestra in state cultural events: the solemn ceremony of burial of the remains of unknown soldiers in the crypt of the All-Holy Memorial Church, concerts in the Brest Fortress and at the award ceremonies “For Spiritual Revival”. The orchestra took part in the International Competitions named after L.P.Alexandrovskaya (2004, 2012), the International Youth Competition named after P.I.Tchaikovsky (2015, Novosibirsk); in the republican cultural events “Spring of Victory”, “Choral Veche”", the International Piano Competition “Minsk 2021”. The symphony orchestra also participated in the events of the Belarusian Peace Foundation, the Republican Public Association “Belaya Rus”, concerts in memory of the victims of the Holocaust and the Chernobyl accident.

Under the leadership of People’s artist of Belarus Alexander Anisimov, who took the post of chief conductor in 2001, the orchestra finds new ways and forms of concert activity: symphonic cycles “Classics for Everyone”, “Country Symphony”, “Resurrection of Classics”, a cycle of concerts for children and youth, a subscription “Playing with the orchestra”. The concert series “Palette of Living Classics” at the National Art Museum of the Republic of Belarus is very popular. Concerts in the open-air format “Classics at the Town Hall” gather up to 10 thousand listeners.

The geography of the Symphony orchestra’s tours is wide: Bulgaria, Germany, Italy, Greece, Holland, Lebanon, France, Switzerland, Finland, Belgium, Austria, Spain, Lithuania, Estonia, Slovakia, Poland, Japan, England and China. For three years (2001–2003) the Belarusian Symphony orchestra took part in the International Opera Festival in Wexford (Ireland). In 2008, the orchestra took part in the XLIV International Music Festival “Bratislava Autumn Celebrations” within the framework of the Days of Culture of the Republic of Belarus in the Slovak Republic. In 2010, the “New European Festival” in Germany invited the orchestra to participate in performances. In the same year, the State Symphony orchestra performed with great success at the XIV International Festival in Switzerland “Les Classiques de Villars”, and in 2011 took part in the International festival “Musical Walks in Reims” (France). A bright cultural event was a concert within the framework of the action “Union State – Victory Veterans” at the Column Hall of the House of Unions in 2010 and at the Concert Hall named after P.I.Tchaikovsky in 2016 (Moscow). In 2012, the collective successfully represented Belarus at the Days of culture in St. Petersburg.

Traditionally, the orchestra opened the Days of culture of the Republic of Belarus in the Republic of Lithuania. Participated in the International Classical Music Festival named after M.K.Oginsky in Plunga (Lithuania, 2015). Twice participated in the opening concert of the Festival “Pro-Baltic” in Torun (Poland, 2016, 2019). Concerts were held with great success in the Estonian cities of Pärnu and Jyhvi (2016). Since the same year, the Symphony orchestra has been conducting an annual tour in China. For more than ten years, the orchestra has been touring the cities of Germany, large-scale tours of European countries with the programs “Music of Hans Zimmer”, “The Lord of the Rings”, “The Lion King”. Unforgettable impressions were left by joint projects with Anna Netrebko, Jose Carreras, Denis Matsuev, Dmitry Hvorostovsky, Peter Donohoe, Denis Shapovalov, Olivier Charlier, Nikolai Lugansky, Maxim Vengerov, etc.

But  the main Orchestra of Belarus can handle not only with classical music. The collective responds with regard to the proposals to collaborate with pop- and rock-musicians and have already performed in collaboration with rock-groups, soloists and composers: Alexander Malinin, Maxim Dunayevsky, Alexander Zhurbin and others.

The orchestra carries out significant work to popularize the music of modern Belarusian composers. The collective was the first performer of many works by E.Glebov, D.Smolsky, S.Cortes, G.Gorelova, V.Kuznetsov, S.Beltyukov, O.Khodosko. In 2019–2020, a CD with recordings of music by Belarusian composers was released.

The cycle of concerts in the Small hall named after G.Shirma of the Belarusian State Philharmonic Society is very popular, where the orchestra presents music of different eras and styles, from Baroque to the present day. The Small hall has become a popular platform for demonstrating the skills of orchestra soloists and ensembles.

Alexander Mikhailovich Anisimov – a Chief Conductor and an Artistic Director of the State Academic Symphony Orchestra of Belarus, a Guest Conductor of the National Academic Bolshoi Opera and Ballet Theatre of Belarus.

The professional career of the musician has begun at the Leningrad Small Opera and Ballet Theatre named after M.P. Mussorgsky (now Mikhailovsky). In the 1980s he worked with leading musical theatres and orchestras of the USSR. Since 1985, he began to cooperate with the Leningrad Opera and Ballet Theatre named after S.M.Kirov (now the Mariinsky), where he conducted the prime compositions of the opera and ballet repertoire, as well as symphonic programs. In 1993 he worked with Mstislav Rostropovich on B.Britten’s “War Requiem” in Great Britain and Spain.

In 1980–1984 and 1989–2003 – took a position of a Chief Conductor of the Bolshoi Theatre of Belarus. In 1985–1989 – Chief Conductor of the Perm Opera and Ballet Theatre (staged the first production of the opera Fiery Angel by S. Prokofiev in the USSR (1984)), in 1998–2001. – National Symphony Orchestra of Ireland (RTÉ), 2005–2009 – Busan Philharmonic Orchestra (Republic of Korea), 2003-2007 – Rostov State Musical Theatre. In 2011–2017 – Artistic Director and Chief Conductor of the Samara Academic Opera and Ballet Theater. Samara performances “The Queen of Spades” and “Lady Macbeth of the Mtsensk District”, performed in 2016 and 2017, were nominated for the Russian National Theatre Award “Golden Mask” and were shown in Moscow; for the Rostov production of “Lady Macbeth of the Mtsensk District” Alexander Anisimov was awarded the “Golden Mask” in the nomination “Opera/ Conductor” (2005).

Professor Alexander Anisimov have made a significant contribution to the education of young musicians – under his leadership of the student’s Symphony orchestra of the Belarusian state Academy of music has prepared programs for performances on the stages of the Belarusian State Philharmonic Society, the Moscow Conservatory and Germany.

Maestro Anisimov has performed in major theatres around the world, among them The Bolshoi Theatre of Russia, The Theater Colón in Buenos Aires, Carlo Felice in Genoa, La Fenice in Venice, The Opera Bastille and The Palais Garnier in Paris, The Gran Theatre del Liceu in Barcelona, State operas of Hanover and Hamburg, The Komische Oper Berlin, Houston Grand Opera, Opera of San Francisco, Sydney Opera House. He conducted many famous orchestras in Russia and Europe, these include the Concertgebouw, the Rotterdam Philharmonic, the Birmingham Symphony Orchestra, The Royal Liverpool Philharmonic Orchestra, The London Symphony Orchestra and others. To recognize the skill of the Russian conductor, the orchestra of the Academia di Santa Cecilia in Rome presented him the conductor’s baton of Leonard Bernstein.

For many years Alexander Anisimov collaborated with The National Youth Orchestra of Ireland, with whom he staged the tetralogy “The Ring of the Nibelung” by R.Wagner. The production won an Irish award – Allianz Business to Arts (2002). The conductor performs at the Opera of Ireland and at the Wexford Opera festival, where he made his debut in 1993 with the opera “Cherevichki” of P.Tchaikovsky; he is also the honorary President of the Irish Wagner Society.

Among the conductor's numerous recordings are all symphonies, the ballets of “Raymonda” and “Times of years” of А.Glazunov with The Moscow Symphony Orchestra (Naxos); all symphonies and poem “Bells” of S. Rachmaninoff with The National Symphony Orchestra of Ireland (Naxos); 10th Symphony of Shostakovich with The Australian Youth Orchestra (MELBA); opera “Demon” of А.Rubinstein from the Wexford festival (Marco Polo); DVD-recorders of opera “Lady Macbeth of the Mtsensk District” of D. Shostakovich in the production Of The Gran Teatre del Liceu (EMI).

In 2021, maestro Alexander Anisimov was awarded the Special Prize of the President of the Republic of Belarus “for a significant personal contribution to strengthening peace and harmony in society through music, for the implementation of major republican and international creative projects.” 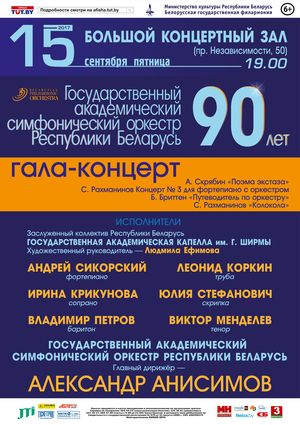 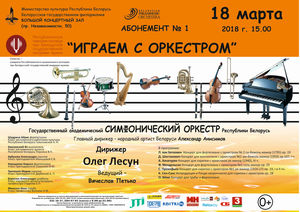 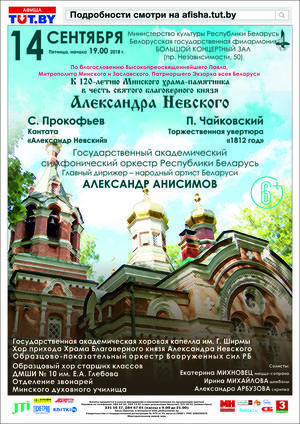 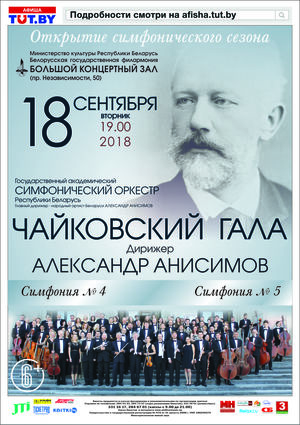 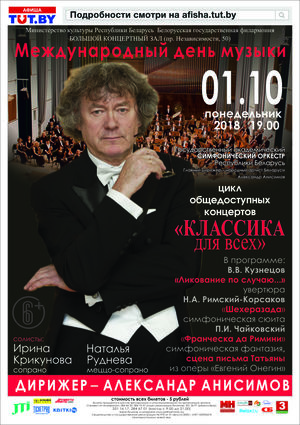