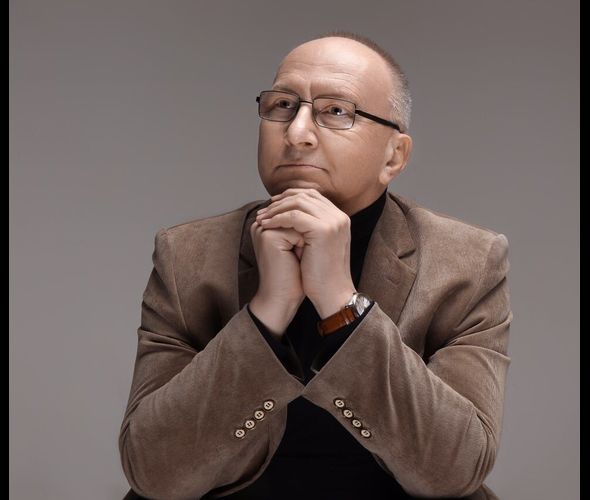 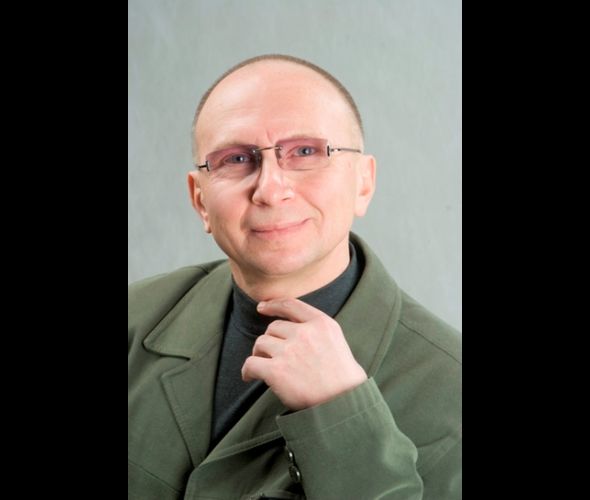 Igor Vladimirovich Olovnikov – People’s artist of Belarus, laureate of the State Prize of the Republic of Belarus, professor of the Belarusian State Academy of Music. He was born in Minsk, in the family of People’s Artist of Belarus, composer V.V.Olovnikov.

He has been a soloist of the Belarusian State Philharmonic Society since 1980. He has successfully toured the country and abroad: in Russia, Ukraine, Poland, Germany, Spain, Great Britain, Japan, China, including at such prestigious concert venues as the big and small halls of the Moscow Conservatory, the big hall of the St. Petersburg Philharmonic, the Kiev House of organ music, the Cathedral “Munster” and Beethoven Chamber hall in Bonn, Casals Hall and Sakura Hall in Tokyo. He is a participant of many famous music festivals. At the World Arts Festival in North Korea in 2002, he was awarded the gold cup. He performs with solo piano and organ programs, as well as in chamber ensembles with well-known instrumentalist soloists, as well as with symphonic and chamber orchestras.

Igor Olovnikov’s repertoire is distinguished by an exceptional variety of genres and styles. In his field of vision – music from the early Renaissance to the samples of the XXI century. The most significant projects of the artist are a cycle of 6 concerts “Fantasies for keyboard Instruments” (organ, harpsichord, piano); monographic concerts from the works of J.S.Bach, L. van Beethoven, F.Chopin, R.Schumann, F.Liszt, J.Brahms, Russian classics, Belarusian composers of the past and present. The original organ programs of recent years are “Six centuries of chorale” and “Seven centuries of secular music”, where compositions from the XIV century to the present day were presented. To the 200th anniversary of F.Chopin’s performer prepared two piano performances, in which all sonatas, ballads and scherzos were performed, as well as a barcarole by the great composer. The pianist celebrated the tercentenary of piano music with the program “Pages of popular classics”, which included the most famous piano miniatures of three centuries, and the 80th anniversary of the Union of belarusian composers – by performing his own treatments of the best pages of national classics. Often Igor Olovnikov combines the performance of piano and organ compositions in one concert. The genre of the piano concerto is represented in the pianist's repertoire by many concerts by W.A.Mozart, all concerts by L. van Beethoven, Concerto No.1 by P.Tchaikovsky, Concerto No.2 by S.Rachmaninov, Concertos No.1–2 by S.Prokofiev, concert by E.Grieg, rhapsody by G.Gershwin, many other European and Belarusian concerts. He performed with them in collaboration with famous conductors such as V.Dubrovsky, Yu.Efimov, G.Provatorov, M.Jansons, A.Chistyakov, L.Kremer, V.Dudarova, A.Anisimov, etc.

Virtuoso performing technique, vivid imagery of musical thinking, strict architectonics of musical form and soft manner of intonation determine the individual pianistic style of the musician. His preferences are organ music by J.S.Bach, piano sonatas by L. van Beethoven, major compositions by F.Chopin, R.Schumann, F.Liszt and S.Rachmaninov. At the same time, the performer attaches great importance to various miniatures, the most appropriate for children's concerts and communication with an unprepared audience. The pianist often accompanies such performances with his own comments on the works, which are presented in the form of a direct and fascinating conversation with the listener.

Igor Olovnikov is the author of about a hundred concert arrangements (transcriptions) for piano of organ, orchestral and vocal works by J.S.Bach, W.A.Mozart, C.Frank, C.Saint-Saens, J. Brahms, S.Rachmaninov, P.Tchaikovsky, D.Shostakovich, music by Belarusian composers: A.Bogatyrev, V.Olovnikov, G.Wagner, E.Glebov, S.Cortez, A.Mdivani. Most of the latter were carried out at the suggestion of the authors. Thanks to the spectacular virtuoso qualities, vivid imagery and ease of presentation, transcriptions have become widespread not only in Belarus, but also abroad. They are constantly included by pianists in concert and competitive repertoire, recorded on discs, used in pedagogical practice. Many of them have been published in various collections of piano music. The author’s collection of piano transcriptions with an introductory article by Igor Olovnikov was published by the Belarusian Academy of music in 2009. In 2011, the pianist gave a solo concert at the Moscow traditional piano transcription festival.

Igor Olovnikov conducts extensive musical and educational work, annually delivering cycles of lectures on professional topics both in the system of professional development of specialists and at various forums of musicians in many cities of Belarus and abroad. In 2009 and 2010, on the basis of the Faculty of advanced training of the Belarusian State Academy of music, he delivered an author's course on the problems of musical and performing expressiveness on the piano for middle and senior level students.

An important aspect of the musician's activity is the promotion of the national musical heritage. He is the first performer of many works by belarusian authors, such as the piano concerto by L.Abeliovich, Concertos No.2–4 and concert variations for piano and orchestra by G.Wagner, piano concerto and sonata “Temptation” by A.Korotkina, etc. Under his editorship, about 20 collections of piano music by Belarusian authors of the past and present have been published, for example, “Virtuoso”, “Pianist”, "Music of the Yelsky family”, “Music of the Oginsky family”, piano compositions by Ya.Tarasevich, N.Orda, F.Miladovsky, A.Abramovich, E.Glebov and many others.

He has been engaged in teaching for more than twenty-five years. From 1987 to 1993 he headed the department of special piano of the Belarusian State Academy of music. Since 1993 – professor by position. He conducts master classes for young pianists not only in Belarus, but also in Japan, Taiwan, France, Poland, Russia, and other countries. Among his students are laureates and diploma holders of international competitions – I.Sergey, A.Shibaeva, Y.Shirinova, A.Sapega, V.Shatskaya, M.Klimovich, etc. He has repeatedly acted as a supervisor and consultant of theses and master's theses of students of the Academy; in his archive there are at least 50 reviews of various research papers, articles and dissertations of colleagues and students written at their request. 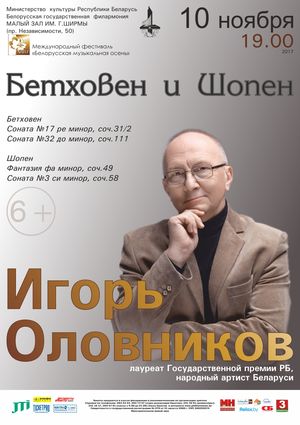 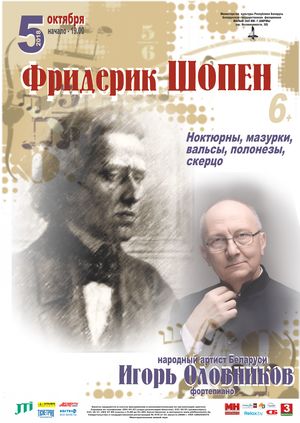 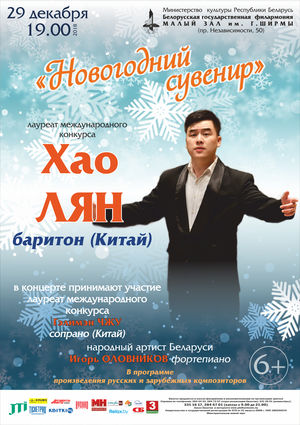 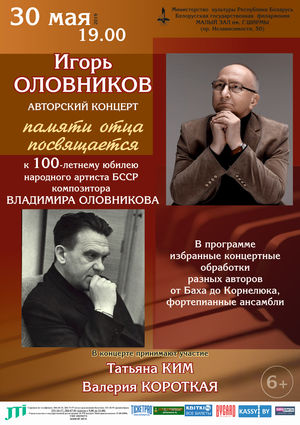